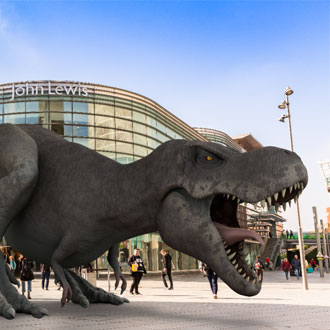 The interactive game, which is available to download for free on smartphones, gives players the chance to hunt for a selection of species, train their favourite dinosaurs and even feed them, using augmented reality.

This year, budding palaeontologists will be also able to search the retail destination for a hidden golden egg, as well as putting their dinosaurs head-to-head in the virtual  battle arena, complete with ‘bubbling lava’.

Running from 2 April until 10 May, Dinosaurs Unleashed will also see a giant T-Rex making a one-off appearance at Liverpool ONE on Saturday 11 April, while the team of park rangers are back during school holidays and weekends to offer advice to those using the app.

Also returning for this year’s futuristic dinosaur hunt will be the real-time leader board and the opportunity to take selfies and videos with the creatures, while a virtual reality dinosaur aquarium has been added into the mix.

Liverpool ONE is one of Europe's leading retail and leisure destinations. Built around the existing streets of Liverpool and located right by the iconic waterfront, Liverpool ONE is a must-visit destination for those who love to shop, eat, drink and be entertained.
Liverpool ONE has over 170 stores, bars and restaurants, a 14-screen cinema and an award winning five-acre park. Stores include high street favourites such as Topshop, Zara, Victoria’s Secret, John Lewis and Debenhams.

Liverpool ONE maintains its’ Green Flag Status for the popular Chavasse Park. The prestigious Green Flag award scheme is judged by Keep Britain Tidy. Surrounded by a bustling and varied leisure terrace, the park plays host to many events for all the family throughout the year. Liverpool ONE is the only new city centre commercial development in the country to include a park that has Green Flag status.