The National Wallace Monument is re-opening its doors to visitors this Friday (19th April) following a complete refurbishment of the exhibition galleries within the famous landmark, which this year celebrates its 150th anniversary.

The work to totally transform each of the three floors within the Monument commenced in February this year. The project is managed by Stirling District Tourism (the charity which manages and operates the Monument as a visitor attraction), and a team of specialist contractors, led by Edinburgh-based designers Studioarc.

For the first time, visitors will be able to see the sculptures of Maggie Keswick Jencks and Mary Slessor in the Monument’s famous Hall of Heroes (created by Graciela Ainsworth and Csilla Karsay respectively) – the first heroines to be recognised in the gallery.

In The Hall of Arms, visitors will be able to see “Wallace – A Hero in The Making” – the dramatic new animated film commissioned specially for the Monument, which introduces the story of the 13th century patriot and martyr, William Wallace. The famous sword which has come to be recognised as a symbol of Wallace’s strength and determination is also displayed on this level.

In The Royal Chamber, the uppermost gallery, a new viewfinder will reveal how the landscape around the Abbey Craig appeared to Wallace in the 13th century, as he led the Scottish army to The Battle of Stirling Bridge on 11th September 1297. Visitors can also design their own Coat of Arms, to be projected onto a battle-shield. 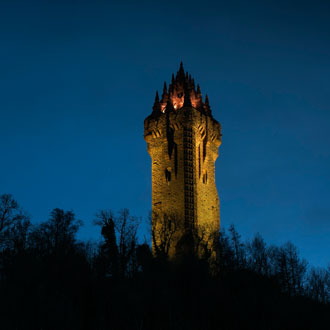 Speaking of the reopening, Stirling District Tourism Chair Zillah Jamieson said: “In the Monument’s 150th anniversary year, we wanted to tell the story of William Wallace better than it has ever been told in the past.  The upgraded exhibition spaces will resonate with modern audiences from all over the world, through dynamic storytelling and digital enhancements.

“We are really looking forward to welcoming visitors to these exciting new exhibition spaces, and we are honoured to play our part in preserving the legacy of William Wallace for generations to come.”

External conservation work will continue following the re-opening of the Monument, and is expected to be completed prior to the end of May 2019.  While this is ongoing, all admission charges will be reduced by 20%.

Due to the success of its flagship climbing wall, which has received more than 100,000 customers…

Easter at The Blackpool Tower

Looking for a fantastic day out with the kids? This Easter, The Blackpool Tower has tons of…