Crieff Hydro, the Perthshire resort celebrating its 150th year in business, has won its latest family-friendly accolade - the top rating of "three ticks" in the hit travel guide Scotland the Best.

In the new edition of the bestselling book, which is available now, the award-winning Crieff Hydro is lauded as "a national institution, still a family business and a truly great family hotel that moves with the times." In an exclusive extract from the book which ran in the Times, author Peter Irvine says: "They strike the perfect balance between relaxation and activity (of which there is a staggering range of choice). In every way they do Scotland proud."

One of only two resorts in Scotland to achieve "three ticks", Crieff Hydro is joined only by its Perthshire neighbour Gleneagles in gaining a top rating. Crieff Hydro Chief Executive Officer and owner, Stephen Leckie attended the official launch of 2019'S Scotland the Best in Edinburgh last week to celebrate the resort's review.

Crieff Hydro, now in its 150th year of business and operated by the same family which founded it, is consistently lauded as one of the U.K.'s most family-friendly resorts. These include: LateRooms.com's Simply the Guest award for family friendly hotel; Scottish Hotel Awards' Family Hotel of the Year; Winner, Family Hotel in The Sunday Times' Ultimate 100 British hotels listing; and Outstanding Contribution, Herald Scottish Family Business Awards. At the end of last year, Chief Executive Officer and owner Stephen Leckie was named Thorntons Business Leader of the Year for his contributions to the tourism sector by Perthshire Chamber of Commerce. 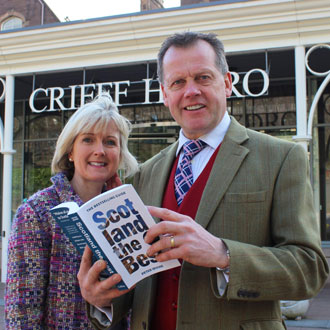 With 215 hotel rooms and 55 self-catering units, Crieff Hydro offers 900 acres of adventures from off-road driving in an undulating quarry to its legendary free childcare.

Part of the Crieff Hydro Family of Hotels, Crieff Hydro is familiar to generations of Scots, who holidayed at the resort in their childhood and now return with their children and children's children. Stephen Leckie said. "Scotland the Best is as much an institution now as Crieff Hydro is, so we're truly honoured that Peter Irvine has featured us. We're proud of the fact that for us, it all starts with family:  a family-run, family of 7 hotels in some of the best locations in Scotland. Recognition such as this helps us with our continuous investment and hopefully keeps Crieff Hydro at the top of its game for generations to come."

Scotland the Best was published on March 21 by HarperCollins.