The Churnet Valley to receive £19,000 Grant toward Leek Project

The Churnet Valley Railway is excited to announce it has been the recipient of a £19,000 grant, that will see the start of its long-held dream of re-opening the line to Leek – all of which forms part of a 5-Year plan that will see over £1 million invested into the heritage line.

The £19,000 grant is courtesy of the Moorlands Partnership Board and will help lay the first 200 metres of railway line from the current railhead at Leekbrook towards Leek, on land already under the control of the CVR. This will send a strong message out to the local community that the company does mean business this time, and that the ambition first mooted in the 1970s to return trains to Leek is finally coming to fruition. The cost of materials for this first stage of work is approximately £40,000, and using volunteer labour to install, the CVR has been able to allocate £21,000 at the current time. The grant therefore covers the shortfall and will allow work to start immediately, with the clearance of earthworks already planned in for the line’s Permanent Way Team over the next few weeks.
This will signal the start of the CVR’s biggest undertaking for over a decade, with the extension to Leek being followed by the re-instatement of the section to Oakamoor and the refurbishment Cheddleton’s station building - all forming part of a major capital investment to be spread out over the next five years. The estimated cost of re-opening into Leek has been projected at £853,000, and the CVR has been invited to submit a full application to the European Agriculture Fund for Rural Development (EAFRD) which will provide a significant grant towards the projected costings. Following a successful first stage bid in 2018, a much more detailed bid is expected to be submitted shortly to assist with the extension to the Barnfields area of Leekwhere a new platform and (at first) basic customer facilities will be provided. To cover the remaining amount, the company will be launching itsfifth public Share Issue in the summer, with the target of raising £200,000 to let the community play a part in bringing the railway line back to Leek. 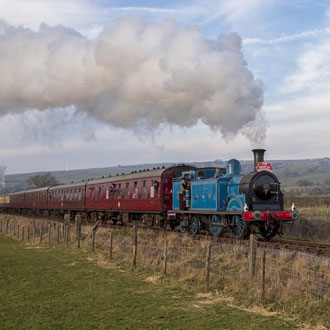 Long-standing CVR Director Tony Hancock comments “Re-instating the line to Leek has been the ambition of so many people for so many years – and it’s now tantalisingly close thanks to support from Staffordshire Moorlands District Council, Severn Trent Water and the dedicated effort of our own volunteers. Now we really need some help from the local community to help us realise this dream together.”

With a set plan in place for the Leek extension, thoughts are also turning towards returning trains to Oakamoor and connecting with the planned developments at Moneystone. The CVR already owns the 2 miles of trackbed, and so rails can be returned once the resources are in place to do so. This is anticipated to commence once the line to Leek has become operational, in order to provide an 8.5-mile journey from Leek deep into the heart of the Churnet Valley at Oakamoor passing through Cheddleton, Consall and Froghall along the way.

And to enhance the visitor experience further, plans have been put together for the restoration of Cheddleton station building following its successful purchase by the line in 2018. This Grade-II listed building was the subject of an appeal to buy from the Council last year, from which enough additional funds were generated to repair the roof. However overall a six-figure sum is required to bring the building back to its former glory, and so this will play a major part in the planned developments. The saving of this building in 1974 signalled the start of the preservation movement in North Staffordshire, for what has become one of the biggest tourist attractions for the area. Therefore it seems right that the building plays a part as the line expands further to achieve the dream first mooted by the early pioneers of the heritage railway.

Fylde Volunteers Remove Over 9 Thousand Bags of Litter From Coast