The Breitling Jet Team will perform an extraordinary display of high-speed aerobatics on both days of the free weekend event, Saturday 10 and Sunday 11 August.

The French-based team, which has attracted huge audiences all over the world, comprises seven Albatros jets that will take part in a jaw-dropping display of formation flying over the iconic Blackpool seafront. They will be joined over the weekend by some of the world’s finest military and civilian aircraft.

The announcement was made at the official launch of Blackpool’s tourism season at Blackpool Pleasure Beach today (March 19) when a whole raft of new shows, events and attractions were showcased to the 500-strong audience including: 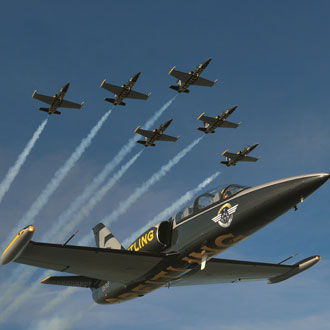 The audience heard that in addition to major annual events such as the Blackpool Air Show, World Fireworks Championship Blackpool, Ride the Lights and the switch-on of the world-famous Blackpool Illuminations, the 2019 season would also include a new-look Pride Festival and the inaugural Night Run – an opportunity to run under the Lights on a traffic-free Promenade.

Blackpool will once again host the UK’s only Nickelodeon SLIMEFEST shows over the October half-term with the six concerts already close to selling out, and the resort will stage some of theatre-land’s best-known productions including Agatha Christie’s The Mousetrap, Kinky Boots, Motown The Musical, Little Miss Sunshine and Calendar Girls.

A VisitBlackpool spokesperson said: “We are delighted to be able to unveil a whole raft of new shows and events that will provide yet more compelling reasons for visitors to come here.

“Blackpool prides itself on never standing still and continually improving the tourism offer. This coming year will see by far the biggest events programme we have ever delivered and much of it is free to access. The Blackpool debut of the Breitling Jet Team is something not to be missed.

“With new hotels opening to complement the huge array of visitor accommodation already on offer, there has never been a better time for families to enjoy the nation’s favourite seaside resort.”

Marketing of the destination will be led by VisitBlackpool, Merlin Entertainments and Blackpool Pleasure Beach, supported by other key partners. A £500k campaign under the Blackpool Has It All title will include TV and outdoor advertising as well as extensive digital and PR activity.

Exciting, invigorating, educational and enlightening. These are the words that will hopefully…

Cracking Crafts For All The Family This Easter