A Happy Ending for Maarten the Colobus Monkey!

Zoo Keepers at Drusillas Park in East Sussex are celebrating after Maarten the colobus monkey finally finds true love through an adoption at the park!

As one of the only animals at the park without an adopter, keepers put the 6-year-old Colobus monkey in the local lonely hearts column to find him a perfect match for Valentine’s Day.

Jack Parker, aged 10, was the first out of many enquiries to adopt Maarten after seeing his sad face on the TV.

Jack, who has been saving his pocket money, told his mum that he wanted to use his savings to adopt the Colobus monkey so they headed to the Drusillas website to complete the adoption form.

Jack said: “I love animals so when I saw the monkey’s sad face, I knew I had to adopt him so he would feel loved. I really want to be a Zoo Keeper at Drusillas when I am older and then I can spend every day with monkeys like Maarten!”

Jack’s mum, Rebecca Parker, said: “Jack’s dreams came true when he met with Keeper Sophie and the famous Maarten himself! I am very proud of him for saving his pocket money and choosing to spend it on such a wonderful cause. 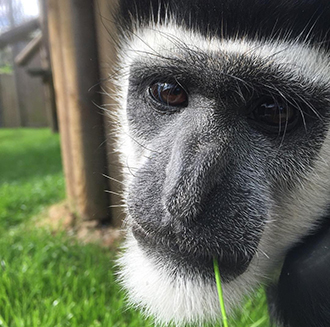 Maarten is loving his new found fame after being featured on The BBC One show, BBC News, BBC Radio 1 and even across the pond on Fox news.

Head Keeper, Sophie Leadbitter, said: “Being a chilled out monkey, Maarten isn’t fazed by his new found fame! He was excited about being mentioned by his favourite Radio 1 DJ, Nick Grimshaw, but other than that, he’s just happy that spring is on its way so he can crack on with some sunbathing!”